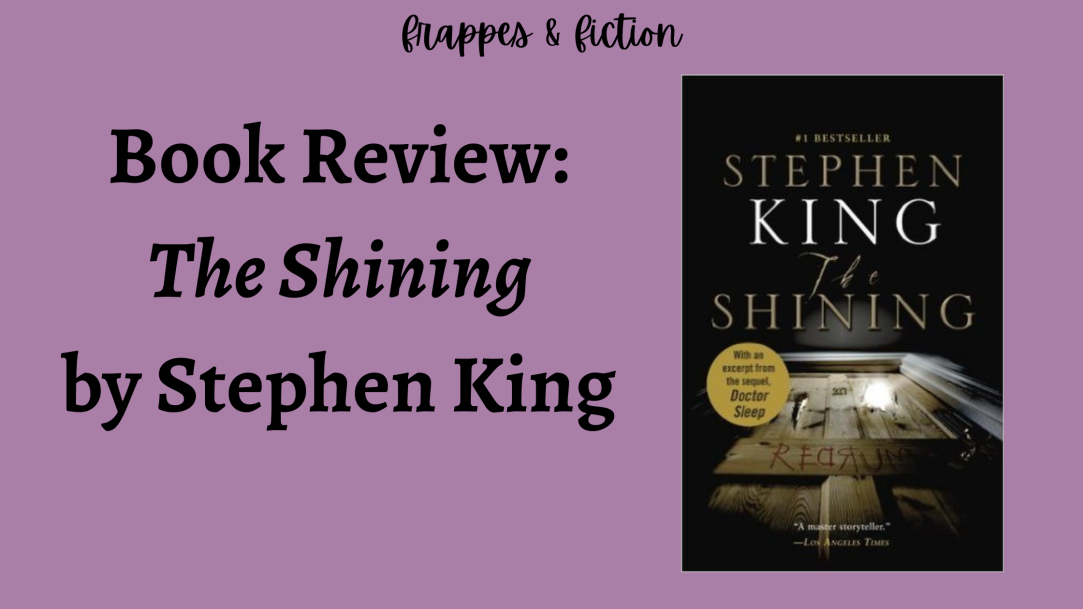 (I meant to post this in October but, as they all say, better late than never)

By Emily @frappesandfiction in Book Reviews on November 26, 2021
8 comments

(I meant to post this in October but, as they all say, better late than never)

Jack Torrance’s new job at the Overlook Hotel is the perfect chance for a fresh start. As the off-season caretaker at the atmospheric old hotel, he’ll have plenty of time to spend reconnecting with his family and working on his writing. But as the harsh winter weather sets in, the idyllic location feels ever more remote…and more sinister. And the only one to notice the strange and terrible forces gathering around the Overlook is Danny Torrance, a uniquely gifted five-year-old.

The really interesting thing about this book is the characterization. Most of the beginning is spent setting up the family and fleshing out each of the three main characters:

Jack Torrance— the father. We learn that he used to be an alcoholic, and he has an anger management problem that he’s tried to push under the rug. He swore off drinking after he broke his son’s arm in a fit of drunken rage. He kind of sets up the book’s themes on the destructive nature of alcoholism.

Wendy Torrance— okay, Wendy doesn’t really do that much compared to the other two. She’s just kinda there. Thanks, patriarchy! (I’m kidding, that’s a joke)

Danny Torrance— the Psychic Kid Who Sees All The Ghosts And/Or Miscellaneous Creepy Things And/Or Major Red Flags That The Adults Can’t See. This is definitely a trope, although this book is pretty old so I don’t know if it started the trend.

I read something in someone else’s review about how this book could be about the supernatural, or it could just be about the state of mind of the protagonists. And I definitely agree. It’s open to interpretation. Is the Overlook haunted or is the novel about the insanity brought on by isolation? (this would have been great to read during quarantine. Not)

Sure, it’s strongly suggested that the hotel is, you know, haunted, but this is literature and literature is open to interpretation by us rationalists.

My favorite thing about the book was it’s slow progression into the inevitable ending. The book starts off pretty innocuous. We’ve got a normal family, albeit with some problems in the past, but they’ve gotten over it. They’ve got a happy kid, their marriage is fine, and the only issue is Jack’s lingering guilt over incidents in the past. Danny has a little bit of telepathy going on but other than that they’re normal.

When they first move into the Overlook, everything from Jack’s and Wendy’s perspectives seems harmless. They interpret everything that goes on as regular quirks or strange events.

It’s only from Danny’s POV that we start to get an inkling that something is wrong. But the parents are oblivious; Danny’s nightmares and unusual behavior is attributed to his attempts to cope with the move and concerns about his parents’ marriage. As is common in horror novels, the kid is the only one to realize at first that they are in a hAunTeD hOuSe.

This, of course, creates a fair amount of dramatic irony. The reader is uncomfortably aware of what’s happening to each character separately, and the omniscient third-person narration reveals what each family member is hiding from the others. This leads to a fair amount of suspense, and it definitely works for the story.

Overall, I enjoyed my first “real” Stephen King novel, and while it wasn’t one of the best books I’ve ever read, I am sure I will pick up another in the future.

Also, I was kind of spoiled as to what happens at the end by…. that one meme format. You know the one I’m talking about?

Have you read The Shining? If so, what did you think of it? Let me know in the comments!

8 comments on “Book Review: The Shining by Stephen King”