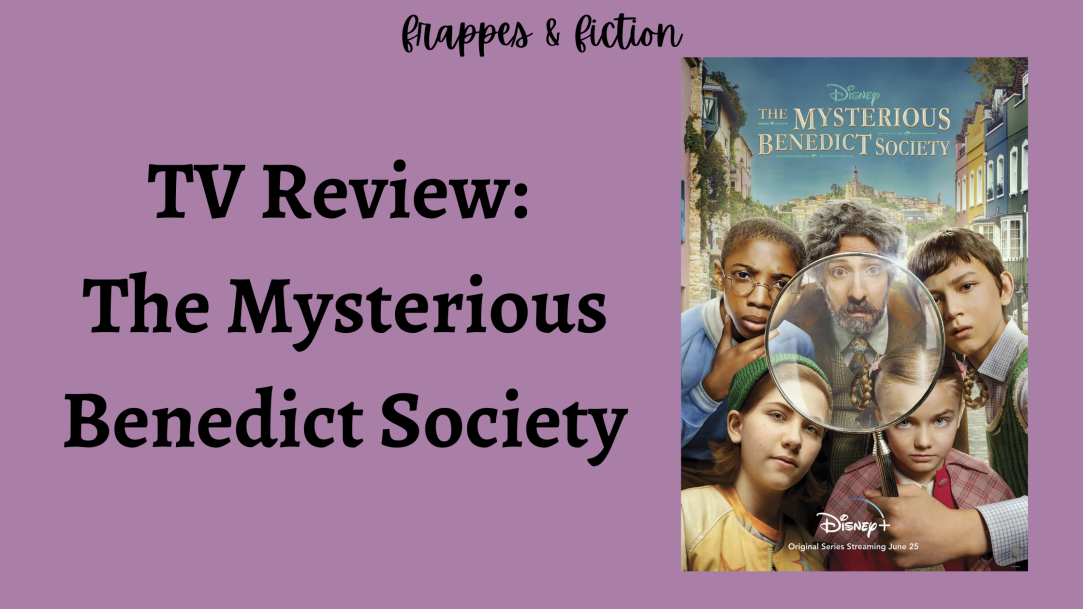 This is not a TV blog, but I’m going to make an exception for this particular (amazing) show.

This is not a TV blog, but I’m going to make an exception for this particular (amazing) show.

Context: The Mysterious Benedict Society was my favorite series in middle school; I loved the books so much, and when I found out they were being adapted by Disney+, I immediately watched the first episode.

When a mysterious ad appears in the newspaper, asking “Are you a gifted child looking for special opportunities?” eager kids from across Stonetown apply for the opportunity to attend the coveted Boatwright Academy. But ultimately only four pass the tricky admission tests– and realize the academy is not exactly what they’ve signed on for.

When they meet the mastermind behind the advertisement: the benign, brilliant and narcoleptic Mr. Benedict, they learn the truth…

Reynie Muldoon– a quiet, methodical bookworm, Sticky Washington– a whiz kid with a photographic memory, Kate Weatherall– an overzealous girl who carries a bucket of tools wherever she goes, and Constance Contraire– a sweet-looking little kid with a not-so-sweet personality– have been selected for a top-secret mission: they must go undercover at the sinister Learning Institute for the Very Enlightened in order to stop an evil genius from mind-controlling the world.

I would describe the vibe of the book as sort of a mash-up of A Series of Unfortunate Events, The Girl Who Could Fly and A Wrinkle in Time. (Sheer perfection)

First of all, I LOVE the aesthetic/vibe of this show. The directors perfectly captured the whimsical but slightly creepy and, well, mysterious feeling of the book.

The color palette and filming location is perfect, and the actors were also really good. Constance, played by actress Marta Timofeeva, was SPOT-ON (except for being a few years older than she is in the book). Every line was perfect. Milligan was also so funny.

They do a brilliant job making the Learning Institute just the right amount of unsettling: from the nonsensical cult-like chants in the classes, the misty atmosphere, the personality of Mr. Curtain, Jackson and Jillson, the Waiting Room…. perfection. Like my imagination just put itself on the TV.

As I saw another reviewer mention, I love that the show didn’t take itself too seriously. The story is whimsical and out there, and the show reflects it. From Jackson and Jillson’s robotic delivery, Martina Crowe’s overdramaticness and MILLIGAN! It’s just great. Everything is just so slightly outside the bounds of reality to be pleasantly fantastical without straying into the ridiculous. You’re able to suspend your disbelief in the fictional universe of Stonetown.

Again, I just love this adaptation. They did a great job developing each of the kids: Reynie and Sticky’s character arcs were present, the relationship between Kate and Constance was great, and the Kate and Martina friendship was also nice (I can’t remember if it was that prominent in the books)

The one thing I did not like was the pacing of the show in some places. To put it bluntly, the scenes with the adults were not nearly as engaging as the ones with the kids at the Learning Institute. They seemed to want to give the two plot sides equal screen time, but it just ended up making the story drag.

Like any great piece of media, The Mysterious Benedict Society is full of positive messages. Some of the main ones:

Was it true to the book?

Overall, yes. There were a few things that were changed and I few things I wish they devoted more screen time, but I can’t discuss them without spoilers, and I didn’t want to put a visible spoiler section on here, so I might discuss them in a different post or somewhere else.

I’d recommend The Mysterious Benedict Society— book and TV show– to everyone, especially if you like puzzles and fun surreal/semi-realistic SFF books!

Have you read or watched The Mysterious Benedict Society? What did you think of it? Let me know in the comments!

This piece makes me think of late fall. For some reason. It’s deliciously depressing.