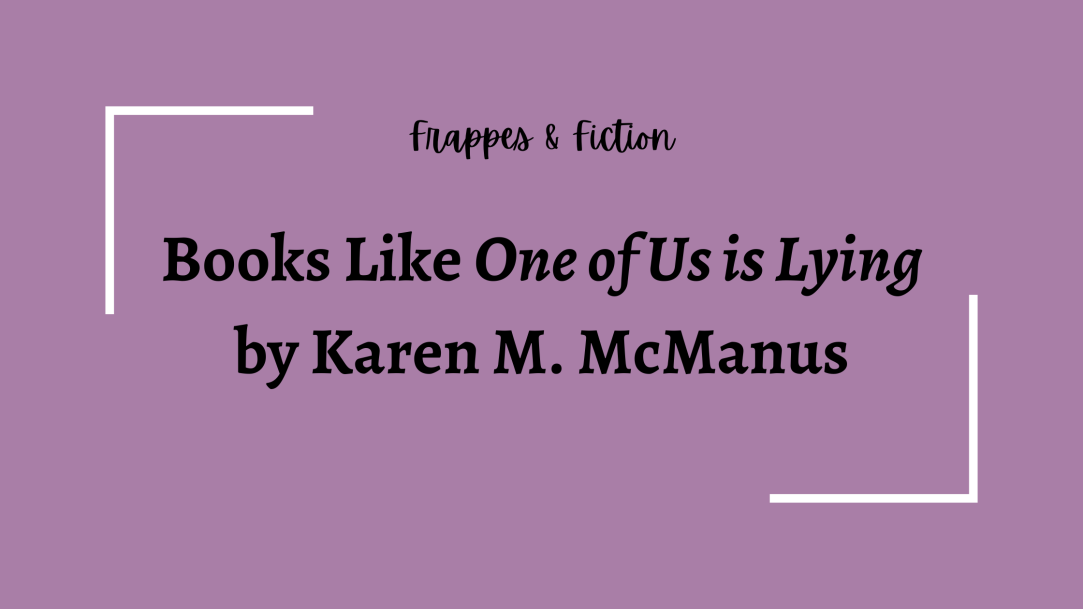 Three months ago, the TV adaptation of Karen McManus’s hit YA mystery novel One Of Us Is Lying premiered on Peacock. I haven’t watched the show yet, but I have read the book and as a self-proclaimed mystery enthusiast, I’d like to share some similar book recommendations with you.

Three months ago, the TV adaptation of Karen McManus’s hit YA mystery novel One Of Us Is Lying premiered on Peacock. I haven’t watched the show yet, but I have read the book and as a self-proclaimed mystery enthusiast, I’d like to share some similar book recommendations with you.

Dear reader, prepare to enter the inescapable world of addictive YA mystery books!

Beware, though– once you’ve started reading these books, they’re extremely hard to put down!

Without further ado, here are five books you should pick up if you’re a fan of Karen M. McManu’s One of Us is Lying. Whether you love McManus’s casts of distinctive characters or the juicy high school drama, you’re sure to be interested in one of the One of Us is Lying contemporaries on this list.

Books Like One of Us is Lying by Karen M. McManus

If your favorite part of One of Us is Lying was the high school setting and intrigue, you should read…

The A Good Girls’ Guide to Murder trilogy by Holly Jackson

I cannot recommend this series enough! Holly Jackson’s YA mystery series comprises three books in total, following the adventures of a teenage sleuth named Pip. The series gets darker as it progresses, and it’s overall a very well-written mystery trilogy.

“The case is closed. Five years ago, schoolgirl Andie Bell was murdered by Sal Singh. The police know he did it. Everyone in town knows he did it.

But having grown up in the same small town that was consumed by the murder, Pippa Fitz-Amobi isn’t so sure. When she chooses the case as the topic for her final year project, she starts to uncover secrets that someone in town desperately wants to stay hidden. And if the real killer is still out there, how far will they go to keep Pip from the truth?“

The first book in the series follows Pip as she investigates a cold case for a school project and, as you can probably expect, starts to uncover a LOT of suspicious things. One of the most unique aspects of the book is its multi-media aspect; the story is interspersed with excerpts from Pip’s notes and all of her interviews with various unsavory characters. You get to come along with Pip, in effect– analyzing the clues yourself as you get deeper and deeper into the network of lies she uncovers.

The twists are shocking, the mystery is extremely well-put-together and all-in-all you need to read this series. End scene.

Kara Thomas is an author that is in general pretty similar to Karen M. McManus, and Little Monsters is my personal favorite of her books.

“Kacey is the new girl in Broken Falls. When she moved in with her father, she stepped into a brand-new life. A life with a stepbrother, a stepmother, and strangest of all, an adoring younger half sister.

Kacey’s new life is eerily charming compared with the wild highs and lows of the old one she lived with her volatile mother. And everyone is so nice in Broken Falls—she’s even been welcomed into a tight new circle of friends. Bailey and Jade invite her to do everything with them.

Which is why it’s so odd when they start acting distant. And when they don’t invite her to the biggest party of the year, it doesn’t exactly feel like an accident.

But Kacey will never be able to ask, because Bailey never makes it home from that party. Suddenly, Broken Falls doesn’t seem so welcoming after all—especially once everyone starts looking to the new girl for answers.“

This book is creepy. Following a girl whose new-girl introduction to her new life after moving in with her father is kind of ruined when, as is typical of these types of books, a murder happens– it’s a wild ride of unsettling events and page-turner moments.

It’s been a while since I read this, but I still remember the reveal at the end. A great read for October.

Set in an elite, eccentric Vermont boarding school with a sinister past, the Truly Devious series is atmospheric, mysterious and suspenseful.

“Ellingham Academy is a famous private school in Vermont for the brightest thinkers, inventors, and artists. It was founded by Albert Ellingham, an early twentieth century tycoon, who wanted to make a wonderful place full of riddles, twisting pathways, and gardens. “A place,” he said, “where learning is a game.”

Shortly after the school opened, his wife and daughter were kidnapped. The only real clue was a mocking riddle listing methods of murder, signed with the frightening pseudonym “Truly, Devious.” It became one of the great unsolved crimes of American history.

True-crime aficionado Stevie Bell is set to begin her first year at Ellingham Academy, and she has an ambitious plan: She will solve this cold case. That is, she will solve the case when she gets a grip on her demanding new school life and her housemates: the inventor, the novelist, the actor, the artist, and the jokester. But something strange is happening. Truly Devious makes a surprise return, and death revisits Ellingham Academy. The past has crawled out of its grave. Someone has gotten away with murder.“

If you liked the character archetypes, friendships and drama in One of Us is Lying, Truly Devious has a lot of the same elements. Stevie is a great character too, and you’re sure to enjoy watching her get to the bottom of the strange happenings at Ellingham Academy.

If you liked the locked-room murder mystery plot line, you should read…

All Your Twisted Secrets by Diana Urban

Now this one fits both the high school and locked room tropes, so consider it an extra relevant recommendation!

“Welcome to dinner, and again, congratulations on being selected. Now you must do the selecting.

What do the queen bee, star athlete, valedictorian, stoner, loner, and music geek all have in common? They were all invited to a scholarship dinner, only to discover it’s a trap. Someone has locked them into a room with a bomb, a syringe filled with poison, and a note saying they have an hour to pick someone to kill … or else everyone dies.

Amber Prescott is determined to get her classmates and herself out of the room alive, but that might be easier said than done. No one knows how they’re all connected or who would want them dead. As they retrace the events over the past year that might have triggered their captor’s ultimatum, it becomes clear that everyone is hiding something. And with the clock ticking down, confusion turns into fear, and fear morphs into panic as they race to answer the biggest question: Who will they choose to die?“

While I was reading All Your Twisted Secrets I was struck by the similarities to One Of Us is Lying.

It has a very similar “vibe,” so to speak. The situation– a scholarship dinner gone very very wrong– was admittedly a bit less realistic, but nevertheless it was a very entertaining read.

And Then There Were None by Agatha Christie

And Then There Were None is a no-brainer recommendation. You can’t get any more classic-locked-room-mystery than this.

“First, there were ten—a curious assortment of strangers summoned as weekend guests to a little private island off the coast of Devon. Their host, an eccentric millionaire unknown to all of them, is nowhere to be found. All that the guests have in common is a wicked past they’re unwilling to reveal—and a secret that will seal their fate. For each has been marked for murder. A famous nursery rhyme is framed and hung in every room of the mansion…

When they realize that murders are occurring as described in the rhyme, terror mounts. One by one they fall prey. Before the weekend is out, there will be none. Who has choreographed this dastardly scheme? And who will be left to tell the tale? Only the dead are above suspicion.”

Following a group of strangers assembled under oh-so-mysterious circumstances on an oh-so-mysterious island, And Then There Were None is the epitome of suspense. You won’t be able to put the book down, and the ending, as is typical of Agatha Christie, is sure to throw you for a loop. (Don’t forget to read the epilogue!)

I listened to the audiobook for this one, and I couldn’t stop until I finished it. It still remains one of my favorite Agatha Christie books, second only to The Murder of Roger Ackroyd.

P.S.- It goes without saying that fans of One of Us is Lying should also pick up Karen M. McManus’s other books– stay tuned for a recommendation post on those!

(All cover images and synopsis excerpts in this post are taken from Goodreads.com)